Jews once lived in the shtetl  and gmina (rural district) of Kopciowo, Suwalki gubernia now known as Kapciamiestis, Lithuania.  This was a small community and many of its residents  were related by marriage. They lived here from the late 18th century until 1941.

No Jews live in Kapciamiestis today. A  few lucky ones emigrated before the start of WWII, a handful survived and most were murdered in the Katkiske Ghetto, Lazidai.  Today, their descendents can be found throughout the world.  We are 3 genealogy fanatics who met because of our interest in this small place.  We dedicate this page to the memory of a community our ancestors loved and called home. Please join us in our effort to collect and make available as much information as we can.

This is a magnified segment taken from a 1909 map of the area. 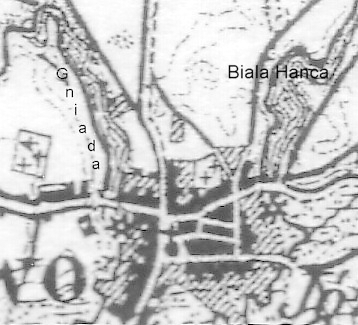 When compared to a detailed 1985 map of Kapciamiestis, it was obvious that the underlying layout of the town centre had barely changed in the intervening years.
The Jewish population lived mainly in the town center within easy walk of the synagogue.  The cemetery is on the outskirts of the town near the Neda River and the main road to Viesiejie. With help from elderly residents of the town and 3 ex residents now in Israel,  it has been possible to create a map which with reasonable accuracy indicates where our ancestors lived.

With the German invasion in 1941, the town centre burned.  Although the original houses are no longer there, the town probably looks much as it did then with replacement housing being built in the traditional wood style on the same or similar sites to those which existed pre war.  Our reconstructed map appears on the Genealogy Page

The Kapciamiestis Rural District included a number of small villages, estates and farms. A list as per the 1923 census can be found here

Maps of Lithuania (in Lithuanian): Detailed map with Kapciamiestis circled.

From the book, Dzuku Krastas.  Kaunas: Krastotvarka, 1999 maps of current Kapciamiestis and the Lazdijai region

A map of the Holocaust in Lithuania is found in Lietuvos istorijos atlasas. Vilnius: VAGA, 2001.

Site by Dig-it
Scroll to top
Skip to content